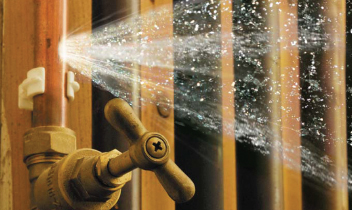 Arthur investigates the most common and expensive reasons for rental claims to buy-to-let properties in the UK.

A recent investigation by the Simple Landlords Insurance company analysed the data from 100,000 polices to find the most frequent rental claims in buy-to-let properties. By identifying these, it helps us understand why people pay higher insurance premiums.

The most common reason for rental claims was water damage due to a burst pipe – it accounts for a fifth of all insurance claims by landlords. They found two main reasons for the damage: either someone leaving the tap running or poor plumbing from other adjacent properties. Frost damage tended to be the main cause of the burst during the winter months, as the water freezes and expands in the pipes, making them burst. The average repair cost for water damage from a burst pipe was found to be £4,500, with an average repair time of 66 days.

Storm damage was also an extremely common reason for rental claims, with a an average repair cost of £1,500. and average repair time of 68 days. Simple Landlords Insurance highlighted that certain features can make properties particularly vulnerable to storm damage, such as conservatories and dormer windows.

Theft and damage from break-ins was also one of the most common reasons for rental claims, unfortunately. The damage caused by thieves forcing their way in was the third most likely reason for a landlord claim. Burglars often smash doors, damage frames, and break windows to gain entry into the property. The best way to avoid this is to install good locks as well as deterrents, such as porch lights and burglar alarms. The average cost was estimated at £2,300, with an average repair time of 62 days.

Electrical fire were found to be the most expensive claim, with an average claim cost of £25,000, and an average repair time of 141 days. Fires caused by electrical damage are the most expensive to repair due to strict regulations for electrical safety. If landlord fail to adhere to thee rules, then they can face fines of up to £20,000 and even face the invalidation of their insurance policy. The best approach is to make sure all electrics comply with current building regulations. For older buildings, new plastering and appliances are good, but earth wiring is a necessity.

Tenant damage is another common claim, although it is often not covered. Landlords have recently been hit by metal thefts costing over £8,000. Landlords should find out if their normal policy covers this, or whether they have to take additional protection. Often, the best way to avoid tenant damage is to simply use better background checks and make sure you communicate with the landlord to gauge their character. Arthur Online’s app is a great way to communicate with tenants to avoid any miscommunication.

Don’t forget to follow Arthur on social media for all the latest property updates!

Solar Panel Project in Warrington Given the Go-Ahead

Why is tenant retention so important?